Skip to content
(Chinhphu.vn) – In September 2020, Vietnam’s shrimp export (export) reached nearly 385 million USD, an increase of over 25% compared to September 2019, the highest growth rate since March this year. 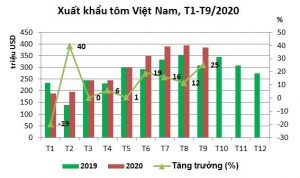 In the first 9 months of this year, shrimp exports reached 2.7 billion USD, up 10.5% over the same period in 2020. In which, whiteleg shrimp accounted for 72% of the total turnover, tiger shrimp accounted for 16%, the rest is marine shrimp.In September 2020, excluding exports to Japan decreased, Vietnam’s shrimp exports to other major markets increased such as the US (+ 39.6%), China (+ 22.9%), EU (+35, 4%), South Korea (+ 3.2%), UK (+ 54.3%), Canada (+ 47%), Australia (+ 50.7%). Notably, Vietnam’s shrimp exports to the EU in September 2020 reached the highest growth rate since the beginning of the year thanks in part to the positive impact from the Vietnam – EU Free Trade Agreement (EVFTA). The main import markets of Vietnamese shrimp increased imports to serve year-end festivals.

The US is the leading market for importing (importing) Vietnamese shrimp, accounting for nearly 24%. Vietnamese shrimp has a competitive advantage over rival sources such as India and Ecuador thanks to a faster stabilization of production after COVID-19 epidemic. After 9 months of exporting shrimp to the US market reached over 634.4 million USD, up 33% over the same period last year. The US is considered the market with the most stable demand

On the EU market, restaurants and food services are gradually reopening. The tourism industry also started to kick off. Meanwhile, retail or online sales continue to increase and demand for shrimp for the retail segment will increase in preparation for the year-end holidays.

After decreasing in previous months, Vietnam’s shrimp exports to the EU started to grow well in the third quarter of 2020 thanks to the positive impact from the EVFTA Agreement, which took effect from the beginning of August this year. After the first 9 months, shrimp exports to this market reached over $ 371 million, up 2.3%.

The EU is a market with good profit margins and this will be a market that many enterprises focus on exporting in the last months of the year. Vietnam shrimp exports to the EU from now to the end of the year are expected to continue to increase.